However, with Paula, we discuss how financial independence can actually be a moving target.

Financial independence is the state in which your potential passive income, typically through investments, is enough that you could make decisions from a place of hope and desire, rather than fear or obligation.

She started as a newspaper reporter in a scenic Colorado town.  She didn’t earn much – $21,000/year – but she enjoyed her work.  Life was great except for the lack of freedom.

So she saved money and hustled during the evenings and weekends by writing freelance articles and saving every dime.  She landed a few promotions with some pay raises and tucked it into a savings account.  Slowly, hundreds turned into thousands.  In April 2008, she handed in her resignation and bought a one-way airline ticket to Egypt.  She had $25,000 in the bank.

She spent the next two years backpacking across Asia and Australia.  Riding camels in Cairo, scuba-dived in Thailand, exploring the Indonesian islands, hiking the Tasmanian mountains, & driving 16,000 miles across Australia!

When she returned to the U.S. in 2010, she had a terrifying thought: she might need to get a job again.  But she couldn’t go back to a crappy cubicle. she wanted sustainable, long-term freedom.

So first she built a six-figure income as a self-employed writer.  This took a few years, but she eventually earned a well-paid living from her laptop.

Then she decided to invest in real estate.  So she saved her “day job” money and bought a triplex.  She moved into one of the units and rented out the other two.

Thanks to the rental income, she lived “for free,”  Letting her continue to save money and reinvest it into more real estate.  She eventually built a real estate business that generates profits while she sleeps.

She is now financially independent and doesn’t need to answer to a boss ever again. 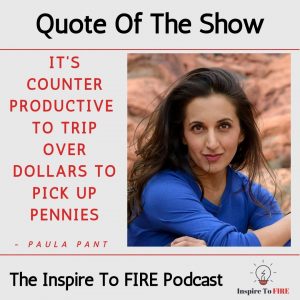 If you would like to help the show you can subscribe and leave a review anywhere you listen to podcasts.