We Compare RSP vs SPY:

Choosing between two great investment options like RSP vs SPY can be difficult.  They are both great funds and popular among investors.

In this article, we compare these ETFs with respect to performance, holdings, minimum investment, and cost.

The primary difference between RSP and SPY is the brokerage that issues the fund.  RSP is an Invesco fund, while SPY is a fund from State Street Global Advisors Trust Company.

RSP is a Invesco fund

Another significant difference is the index these funds track.

RSP tracks the Equal-Weighted Index of the S&P 500

SPY also tracks the S&P 500. However, it’s not a weighted index, and ETF can invest in any of the proportions depending on their will.

Both funds are incredibly popular with long-term investors.

Lastly, SPY and RSP are exchange-traded funds (ETFs); therefore, they trade intraday until the markets close. As you can see, the long-term performance for RSP and SPY is similar.

Trend analysis from a performance perspective helps understand how ETFs have performed in the past. Although, it’s true that past performance may not be reflected in the future.

However, it helps to understand the return generating capacity of the ETF.

For instance, some ETFs may be exposed to higher risk, leading to a higher return. On the contrary, some ETFs presume lower risk and remain highly diversified.

Let’s compare RSP and SPY with the visuals. Based on the given number, there is not much difference in performance.

Monthly numbers suggest that the return range falls between 4% and 4.66%.

Similarly, a quarterly loss does not significantly deviate from each other. Likewise, annual, five-year, and ten years performance has been in line with each other.

So, there is not much deviation; it’s due to the fact that both of these ETFs are dependent on the S&P-500 index.

Although RSP is an equal-weighted index and investment of the SPY is one-third concentrated in the top ten securities.

It’s equally important to note that the volatility of the S&P 500 is comparatively less than NASDAQ-100.

For instance, the quarterly and YTD loss potential of RSP and SPY indexes is lower than NASDAQ-100 ETFs. However, the same goes for profit.

So, from a performance perspective, we conclude that RSP and SPY do not much deviate from each other. Further, both of these ETFs are somewhat more stable/less volatile than NASDAQ-100.

Similarities between RSP and SPY

First, holdings for RSP and SPY amount to 506 and 507 respectively. Both of these companies are the same.

However, there is a difference in terms of investing proportion.

For instance, RSP is highly diversified; the proportion of the investment in the top ten holdings ranges from 0.24% to 0.3%. So, the total top ten holding amounts to 2.58% total.

On the contrary, SPY is a little more concentrated.

Here is RSP vs SPY holdings side by side: There is an overlap between RSP and SPY that includes 503 stocks.  All the holdings in RSP are in SPY.  The difference is in the overlap by weight.

This overlap means RSP includes the majority of holdings in SPY. 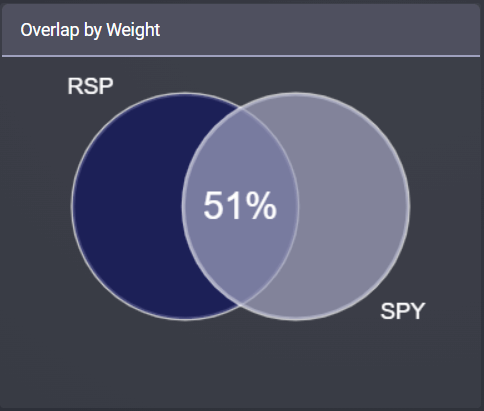 A possible reason for the higher expense ratio of RSP includes the higher credibility of Invesco which enables them to charge a higher price. The company is well known for managing market king ETFs like QQQ.

Regardless, expense ratios make a difference for investors.

This difference for a long-term investor could be considered significant.

Winner: SPY with the lowest expense ratio of 0.09%

What Is The Difference Between RSP and SPY?

The main difference between RSP  and SPY is the brokerage that issues the fund.  For example, Invesco issued RSP, while State Street Global Advisors Trust Company issues SPY.

They also differ in how they track their index.

Invesco S&P 500® Equal Weight ETF (RSP) launched in 2003 and tracks an equal-weighted index of S&P 500 companies.  Simply put, RSP takes all the stocks in the S&P 500 and weights them equally.

This equal weight gives smaller companies a larger representation in the ETF.  As a result, RSP has a higher beta compared to other S&P 500 ETFs.

Invesco S&P 500® Equal Weight ETF (RSP) is popular for so many reasons, of which consistent returns are a significant part.  It has performed well with over 13% annual returns over the last 10 years. Invesco’s RSP is largely made up of Nielsen, EPAM Systems, Twitter, Lamb Weston, and American Airlines and provides exposure to over 500 stocks.

Here are the top 10 holdings for RSP:

Major sectors in the index include:

RSP and SPY are exchange-traded funds (ETFs), so there is no minimum investment.

The only requirement is the need to purchase at least one full share.

Usually, fractional shares are unavailable for ETFs unless you use M1 Finance. ***(Get $50 When You Use This Link)***

M1 Finance allows you to purchase fractional shares with no commission.

Buying fractional shares allows you to maximize your investment.  You won’t have to keep your money sitting idle until you have enough to purchase a full share.

This is especially beneficial when buying SPY because of its high share price.

I also use Personal Capital to track my investment fees. They have a free Retirement Fee Analyzer that tells you the future impact of fees on your portfolio.

Personal Capital’s free tools allow you to easily find which of your investments has high fees so that you can switch them to low-cost options.  (Get a $20 Amazon Gift Card with this link when you add at least one investment account containing a balance of more than $1,000 within 30 days)

SPY was created in 1993, making it the first exchange-traded fund listed in the U.S.  SPY is also one of the most popular ETFs funds available.

It currently has an expense ratio of 0.09% and offers exposure to over 500 stocks.

The SPDR S&P 500 ETF Trust (SPY) is considered a large blend ETF and tracks a market-cap-weighted index of large and mid-cap stocks.

The S&P Committee selects these stocks.

Over the last 10 years, SPY has had an average return of 15% annually.  This is almost the same as the performance of the S&P 500 over the same time frame.

The goal of SPY is to mirror the results of the S&P 500 index. The top 10 holdings for SPY make up 28% of its total assets.

These are the top 10 holdings for SPY: 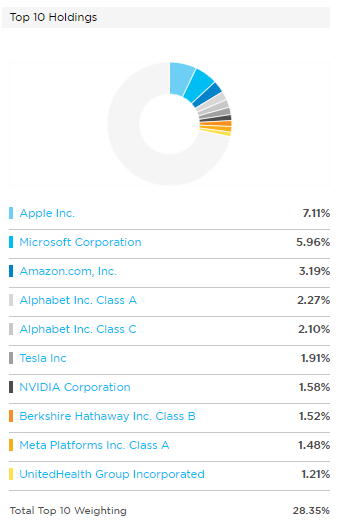 SPDR S&P 500 ETF Trust (SPY) is largely made up of Apple, Microsoft, Amazon, Google, and Tesla.

However, it also provides exposure to over 500 other stocks.

Which Is Better RSP vs SPY?

RSP and SPY are both excellent investments depending on your investment goals.  They both have a history of outstanding performance returns and are low-cost ETFs.

The answer to which ETF is better depends on your investing goals and the brokerage you prefer to use.

Here are some advantages of both of them:

I believe both RSP and SPY can be great investment options, and both can get you to Financial Independence Retire Early (FIRE).

They both have super-low expense ratios (0.20% vs 0.09%).  Therefore, either option is a great investment for financial independence.

After keeping fees to a minimum, you can work on increasing your savings rate and prioritizing your investments.

Then, you will be well on your way to Financial Independence and Early Retirement!

SPY and RSP can be great long-term investments.  This is because they both have a similar return on investment.

However, commissions and fees can add up over the long term.

So, for those reasons, I prefer SPY.

SPY has higher liquidity with over $374 billion in total net assets compared to $34 billion with RSP.

If you already have an Invesco account, it makes sense to go with RSP for the ability to purchase the ETF commission-free.

You should consider your investment goals when deciding between the two funds.